How many books have you read where you can guess exactly what is going to happen to the characters?  I know as a reader and editor I’ve been through a few.  It’s not that the characters are bad; they just don’t follow Murphy’s Law.  I get it.  Your character is the fastest gun in the land.  He/she can outdraw and outshoot anyone.  That can get pretty boring.  Or, you have to create insanely elaborate situations for them to navigate to challenge their prowess and entertain the mob (your readers).  Here’s an idea, instead of writing what should happen, leave it to fate.

This concept is pulled from the Dungeons and Dragons (D&D) realm.  For those of you who aren’t giant nerds like me, D&D is basically a game where one person creates a story and friends come and navigate it.  Each role-player has a character they created and they use dice to determine the effectiveness of their characters actions throughout the story.

The transition into using this in your own writing is simple.  Roll a die and let that determine how effective your character is at dealing with a situation. After all, even the fastest shooter in the world is still impacted by luck. 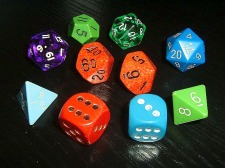 Here’s the application.  Let’s use my own character, Drake Nelson, from my upcoming book Wastelander: The Drake Legacy.  Drake is chilling out in a settlement and needs to go to the bar to quench his thirst.  He walks in.  Sitting at a table is notorious bad guy #3.  Notorious bad guy #3 smacks women around, steals milk from babies, and once killed a man for his horse only to let it run off into the sunset for dramatic effect.  Drake looks up at me and I know—notorious bad guy #3 must die.

Now Drake has ninja speed with his pistol.  If I stuck with his character blueprint, this would be an easy confrontation for him.  Especially because bad guy #3 is just a lousy thief, not an experienced gunfighter/renegade maverick like Drake.  So instead of sticking with the boring, I let the dice decide. 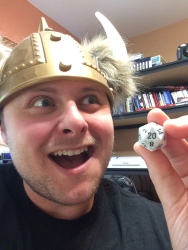 If I roll a high number, the normal thing would happen.  Drake doesn’t say anything, he simply shoots the man in the face and notorious bad guy #3 falls backwards out of his chair.  Everyone in the bar cheers.  Women throw panties at him.  The bartender pours him a drink.  It’s kind of funny, but it’s also kind of boring.

If I roll a middle number, it can go either way.  Drake pulls the pistol from his hip.  The iron sights flash into focus for a millisecond and he begins applying tension to the trigger.  The town drunk, Steve (it always has to be Steve doesn’t it), stumbles into the bar and bumps Drake in the back as the gun recoils.  The bullet punches a hole in the ceiling and chunks of plaster land on notorious bad guy #3’s head. 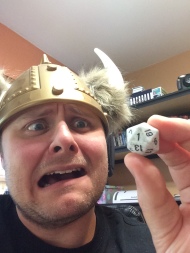 If I roll a low number, (say a one) that would be a critical fail. Drake doesn’t just fail, he fails miserably.  Drake grips his pistol and pulls it from the holster.  His hand moves so fast it’s a blur of black and silver.  Unfortunately, a bird had shit on his pistol handle earlier.  The feathered feces is still glistening and fresh. The slickness causes the pistol to fly from his hand.  It sails across the bar and smacks the unaware bartender in the forehead. Worse, the bartender is the mayor’s brother.  Now Drake has revealed his intention to notorious bad guy #3, disarmed himself, and assaulted the mayors brother.

Try it out for yourself.  Mix a little luck and chaos into your writing.  While I obviously don’t recommend you use this to drive all action (or even major plot points), it is a fun way to create an unexpected turn.  It’s especially useful if you aren’t entirely sure how your character is going to deal with a situation and your writing is stalling because of it.  This tool allows you to write some potential outcomes and if you feel they are lackluster, blame the dice and bad luck.

If you give it a try, let me know how it goes.  It usually is amusing to say the least.  That’s it for today.  Until we cross quills again, keep reading, keep writing, and as always—stay sharp!

Visits From A Man Named Nobody 80

It’s About Time to Look at the Marketing

Visits From A Man Named Nobody 79